Reflex is Service Oriented, meaning it is focused on Services rather than Servers. This is important for the new world of ephemeral systems. Conventional Configuration management systems focus on servers, but in the world of containers, the server is no longer the asset we care about.

Instead, Reflex pivots its data around Services, and the instances behind those services can be ephemeral or static.

Reviewing the various principles in the Why? section will help you to understand the fundamental paradigm shift at play.

The challenge most systems face is that it is easy to manage a single service, but once we have to offer a service in general production use, we often want to chain them together. For instance, if you want to have a Test environment followed by a QA and then Production. This is a Pipeline.

Lets use an example application Bat’leth Combat Training (BCT). For this application, you want to have to running instances. One is Test, one is Producton. You want to deploy changes to Test so you can verify everything is working prior to getting them into Production. 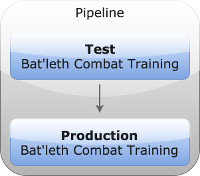 This is where Pipelines come into the picture. Pipelines group together different services, allowing for staging of changes between each. Within Reflex Engine both are represented as objects, where the Pipeline is the top level object, and services are the pivot point, referencing the pipeline, as well as any other related objects such as Instances and Configurations. 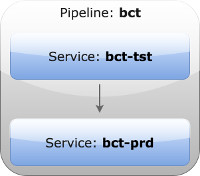 It is recommended that you follow a name convention to help understand the relationships. In this example, bct is the name of the pipeline, and we have named the test service bct-tst and the production service bct-prd.

Behind services are a set of Instances. These may be defined statically, or dynamically (such as with an integration to Docker, Kubernetes, etc). Instances should be treated ephemerally, meaning that the data on an instance record is mostly the way to communicate with the instance, and if it is healthy or not.

Furthermore, instances are still service oriented. They are not servers. An instance is a combination of an address and a port. So you can have many instances on a single server, for instance, if you have many different services running.

As the world becomes more distributed with IaaS, PaaS and other “cloud” like software solutions, the security model of Attribute Based Access Controls becomes critical in maintaining a safe security posture.

Conventional secret management systems are typically secured with a single “key” or password. But if this key or password is stolen, then your secrets may be compromised. The logical step is to lock down your secrets database somehow. But by locking it down, now it is a challenge to use the valuable cloud services that can help you do your job better, so you can stop re-inventing the wheel.

Reflex gives you this capability through ABAC. You can easily create policies that define a flexible set of attribute based criteria to grant access to individual secrets. A simple example is a cloud based container management service. If your controller is from a third party (such as Docker Cloud) where they run the controller but you host your own container services, you have a few common options:

This last option is how Reflex works. When somebody violates your cloud controller they will have your API keys, and you may not even know it. But they do not have the additional attributes, so while your security posture is lowered, you do not have an immediate data breach.

What about Docker Secrets?

The new module from Docker for managing secrets is a long needed step in the right direction, by finally giving people an option other than using insecure and unwieldy at scale environment variables. However, they are still statically managed, and only marginally better than environment variables.

Reflex Engine extends beyond this concept by giving inheritance for managing many different services (or microservices), flexibility as the configurations can be delivered securely in a variety of manners for your application, and loose coupling, where the secrets can be used by any service, not just docker.

Reflex can even leverage Docker Secrets for its own key management, taking over from that point forward. See the tutorial on using Docker Secrets to help Reflex.

Reflex Configurations are very flexible and secure, designed to store both configurations, as well as secrets–to be delivered at run-time. Reflex supports storing them as files within the container, inserting them as environment variables, or delivering them directly to stdin of the container process (most secure).

Configuration objets in Reflex support a heirarchy for easy maintenance at scale, and are flattened at run time. The Configuration objects are JSON documents supporting deep merging for dictionary elements, with inheritance and references to other objects, and ordered set-unions for arrays. Examples area available in the Configuration Objects section of the Object Reference documentation.

There are three relationship types: extends, imports, and exports.

In the shown example, the application Batleth Combat Training named bct, the bct-tst object extends the bct object, which extends the common object. Object keys lower in the tree take priority over those higher when used with extends. So an attribute defined on bct-tst would override one defined on bct or common.

With inheritance, the exports to bct-config is also included in bct-tst and bct-prd, even though it is not defined on the lower objects.

Imports is a way to merge another object into the current one, where it takes priority instead of the current (lower object). Furthermore, imports does not follow any hierarchy of the imported object–it is just the single object that is merged.

Exports is used to define the configurations which are output to a file (if any). It is possible to make a configuration that does not output any data to a file, but rather it is assembled and inserted to STDIN of the running service (this is the most secure method).

You can also test the flattening of your object relationships using the Launch Control command (explained later). It is important to note that in this example launch config refers to the Service name, not the Config name (this is described in the next section).

Or to have it write-out the configs to disk:

Details on Configuration Objects are in the Object Reference section.

This overall view of the three object types: Pipeline, Service and Configurations shows how the bct application may have different objects as they come together. This example also shows the entry point where Launch Assist pivots from, the Service Object.

Every time an object is pulled, policies are evaluted to decide if the calling session is allowed to access the data.

Policies are part and parcel to what makes Reflex unique, and they use ABAC to do this. These are explained in more detail in the section Policies